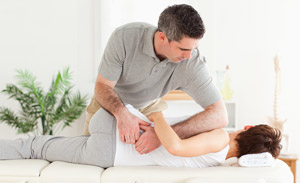 No studies have looked at using both treatments together

Low back pain (LBP) is still one of the most common disorders that causes pain, as up to 85% of people will deal with it at least once. In some cases, LBP does not improve and becomes a long-lasting, or chronic condition. Physical therapy is often recommended for patients with chronic LBP and usually consists of different types of exercise, massage, relaxation techniques and counseling. McKenzie method is one type of treatment for chronic LBP that involves movements of the inner core of vertebral discs, which lie in between bones in the spine. Muscle Energy Techniques (METs) are another popular form of treatment meant to improve the flexibility of tissues in the spine. Many studies have shown that both the McKenzie Method and METs lead to positive effects for patients with chronic LBP, but no research has evaluated the use of both of them together. Therefore, a study was conducted that analyzed the effectiveness of the McKenzie method and MET for chronic LBP patients.

All patients go through 10 daily sessions for five days

A group of 60 patients with chronic LBP were randomly assigned to one of three groups: McKenzie method and MET, McKenzie method alone, and standard physical therapy. All patients had 10 daily sessions performed during five consecutive weekdays. For McKenzie method, sessions lasted 30 minutes and included different techniques in which the physical therapist did mobilizations or applied pressure to the back. For the MET, a relaxation technique was used on the back muscles of patients and sessions lasted 40 minutes. In the standard physical therapy group, patients were treated with massage, laser therapy and a device called transcutaneous electrical nerve stimulation. They were also asked to perform exercises to strengthen the abdominal and spinal muscles. All patients were evaluated before the treatments, immediately afterwards, and then again three months later for numerous variables.

Results showed that the combination of the McKenzie method and MET was most effective overall in treating patients with chronic LBP. This combination led to improved mobility of not only the lower back, but also the middle and upper back. It also reduced levels of pain and improved quality of life. Many of these improvements were also found three months later, which shows that they were lasting. This study suggests that McKenzie method and METs may be best used in combination to treat chronic LBP patients, and together they can lead to impressive outcomes.