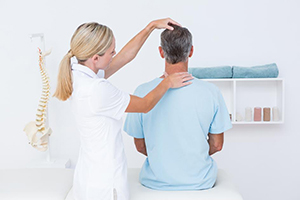 Specific type of rehabilitation program has not yet been evaluated

Cervical radiculopathy (CR) is a neck disorder in which damaged nerves in the neck (cervical spine) lead to pain and other symptoms in the shoulders, neck, arms or hands. In most cases, CR results from a reduction in the size of the intervertebral foramen (IVF), which is an opening between two vertebrae. Spinal issues that influence IVF size include herniated discs, disc degeneration and arthritis.. A variety of treatment options are available for CR, including exercise, physical therapy and posture education, but evidence on their effectiveness is minimal. One possible approach is to focus on exercises that maximize the size of the IVF, which may lead to improvements; however, this type of rehabilitation program has never been evaluated. Therefore, a powerful study called a randomized-controlled trial (RCT) was conducted to determine what treatments are effective and if focusing on the IVF leads to any differences.

Patients with CR were recruited, and after inclusion criteria were applied to the 71 respondents, 36 were accepted and used for the RCT. These patients were then randomly assigned to either the comparison group or the experimental group. The rehabilitation program for the comparison group took place during eight sessions over four weeks. It consisted of stability and mobility exercises, manual (hands-on) therapy from a physical therapist to the neck and mid-back, and a home-exercise program. The experimental group received the same rehabilitation program, but two modifications were made with the intention of increasing the size of the IVF. Patients were assessed for pain, disability and range of motion (ROM) before the program, immediately afterwards, and four weeks later.

Both programs lead to improvements, but no extra benefits seen in experimental group

Four weeks after each program, both groups achieved highly favorable results in pain, disability, ROM and patient-reported improvement. Unfortunately, no significant differences were found between the two groups, which suggests that the focus on increasing IVF size did not lead to any additional benefits. Nonetheless, this RCT shows that an exercise and manual therapy program can lead to various benefits for patients with CR in the short-term. It may therefore be a safe and effective approach for treating patients with this bothersome disorder.